About Matthew Paris and his Maps

In the 1250s a monk at St. Alban’s abbey named Matthew Paris drew several maps of Britain, which he appended to various copies of his history of England. The official chronicler at one of the most important monasteries in the land, Paris was a well-connected man. He knew bishops and archbishops, and knew King Henry III personally.His histories of England are important, but what make them especially interesting is the artwork. Paris was not just a scribe; he was also an artists. And, towards the end of his life, he turned his hand to mapmaking. 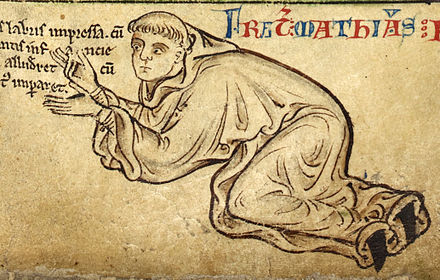 Matthew Paris drew a number of unique maps. He drew innovative  itinerary strip maps that guided the reader from London to Rome, and maybe even on to the Holy Land. And he drew the first regional maps of Britain, made even more notable for his decision to orient them with north at the top, in an age when most maps looked eastward. For resources and readings on Paris’s maps, click here.

Matthew Paris’s most famous map of Britain, the so-called Claudius map (BL MS Claudius D.vi f.12v) is a complex document filled with regions, cities, monasteries, and castles. While not especially geographically accurate, the map nonetheless presents a unique cartographic perspective on medieval England, Scotland, and Wales. There’s a lot to learn from Paris’s map, but — like many medieval documents — it can be hard to read. This tool should make it easier to access Paris’s cartography.

Back to the map